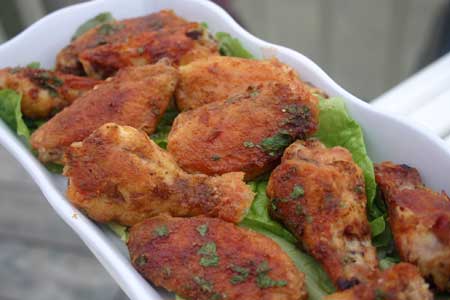 Today I’m participating in my first Cooked in Translation event, where the goal is to focus on a specific dish through the lens of your own culinary traditions. This month’s dish is chicken wings.

I live in northeastern North Carolina where there are two major food groups: seafood and BBQ. We like things vinegary, including our BBQ sauce (no tomatoes allowed), and we consume ridiculous amounts of Old Bay seasoning. A Carolina-style wing would have to incorporate both vinegar and Old Bay.

My other culinary tradition is to make food as diabetic-friendly and heart-healthy as possible, so I didn’t want to fry my wings. I decided to roast them so they would be crispy without a lot of extra fat.

I made two sauces because I generally find that in any group of people, some like spicy food and some don’t. The Mild Sauce is lighter while the Spicy Sauce is more of a traditional wing sauce. I was astonished when I calculated the nutritional information for the wings. My first surprise was how many calories there are in chicken wings themselves even when they’re roasted instead of fried. My second surprise was that the mild wings with olive oil have more calories than the spicy ones with butter. Go figure.

I generally skip the dipping sauce when I eat wings unless they are mouth-scorchingly hot. If you prefer to dip, ranch, blue cheese or even a tartar sauce would work beautifully.

Prep the wings: Preheat oven to 425°F. Place parchment paper on two baking sheets. Mix flour, cayenne, black pepper, Old Bay and salt in a gallon-sized plastic storage bag or a paper lunch bag. Add wings, three or four at a time, to bag and cover wings in flour. Shake off excess and place in single layer on baking sheets (wings should not touch each other). You should have an equal number of wings in each pan. Bake for 25 minutes, turn wings with tongs, then bake another 20 minutes or until wings are browned. (I like to put the pan that was on the top for the first 25 minutes on the bottom for the last 20 minutes and vice versa.)

Nutritional Analysis: These wings are a good source of Protein, Niacin and Selenium. (Source: nutritiondata.com)

Cooked in Translation is run by Paola Malucci of An Italian Cooking in the Midwest. Each month, members of the group focus on a specific dish through the lens of their own culinary traditions. This month’s host is Azlin Bloor of LinsFood. Check out the other great wing recipes below.