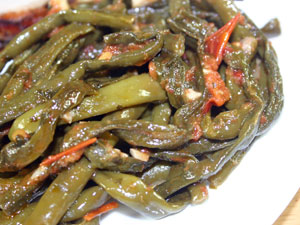 We got some yard-long beans in our CSA box last week. When the farmer showed us the beans, she held one up against her forearm. “I don’t pick them until they go from my fingers to my elbow,” she said.

I started looking around for the best ways to prepare the beans. Janet Fletcher, in Fresh from the Farmers’ Market, says that braising is the way to go and that the flavor of the beans really develops when they are cooked for a long time. So I decided to try braising, using Janet’s recipe for Yard-Long Beans with Tomato, Ginger and Chile.

The beans had nice flavor, but the texture was a bit soft for my liking. I generally prefer vegetables with some toothiness to them. My grandmother probably would have like this recipe; I can remember hearing her say, when served some sautéed green beans in a restaurant, “Sorry, but I like my beans COOKED.”

Some notes about the recipe:

These beans are good for you, but I’m not sure how many of the nutrients are left after the long cooking time. They are low in Cholesterol and high in Dietary Fiber, Folate, Potassium, Manganese, Vitamin A, Vitamin C and Vitamin K.

From Fresh from the Farmers’ Market by Janet Fletcher

Heat a large skillet or wok over high heat. When hot, add oil. When oil is hot, add cumin seeds. Stand back, as they may sputter and pop. When they begin to release their fragrance, add the garlic, ginger and chile. Stir-fry until seasonings begin to color, about 1 minute, then add tomatoes. Cook over high heat, stirring often, until tomatoes collapse and begin to form a thick sauce, about 5 minutes. Add a little water as needed to keep tomatoes from sticking. Add beans, cilantro and ¼ cup water. Season well with salt.

Cover, reduce heat to maintain a simmer and cook until beans are tender, about 1 hour, adding more water as needed to keep beans from sticking. Remove chile before serving.