The Grillmaster often tells a story about a former neighbor’s Middle Eastern mother. Whenever she visited her son in the U.S., she would hollow out squash and stuff them with rice, tomatoes and meat. He was always amazed by how she could scoop out the pulp of a crookneck squash while leaving the skin intact. 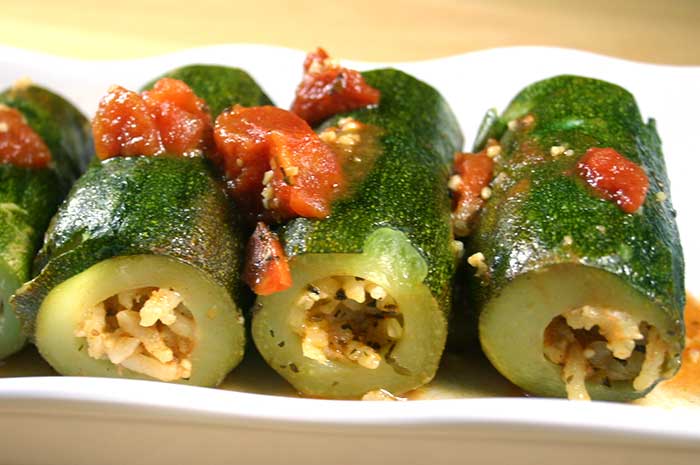 Fortunately, this recipe uses nice straight zucchini that are easy to hollow out. Normally, I go for skinny zucchini, but in this case, fatter is definitely better. If your zucchini are big enough, you can cut them in half crosswise and then take out the pulp with an apple corer – very simple and no finesse required.

The cores (pulp) aren’t used in this recipe, but do save them. I had planned on throwing them into some soup, but The Grillmaster found them first and used them to enhance a chunky vegetable pasta sauce.

How I Made Stuffed Zucchini

The only deviation I made from the recipe below was to use ground turkey instead of ground beef chuck.

When I first read the recipe, I really wanted to cook the turkey a little first. There was something about shoving raw meat and dry rice into the squash that didn’t seem quite right. But I decided to trust Mr. Hazan, who knows way more about Italian cooking than I ever will, and it worked out just fine.

My stuffing was a little on the dry side, so I’ll probably use a mixture of beef and turkey next time. I might also try putting some of the tomato inside the zucchini.

I recommend using a pan large enough so that your zucchini can fit all in one layer. I had to double-stack some of mine and the ones on top didn’t get quite as much tomatoey goodness as the ones on the bottom.

Hazan Family Favorites is a beautiful book with charming stories and pictures from Giuliano Hazan’s childhood. Hazan’s mother is Marcella Hazan, the “godmother of Italian cooking in America.”

My favorite picture in the book is one of Giuliano’s father shaving fresh white truffle over his mother’s plate of risotto (page 68). You can just feel the love they have – for each other and the food. There are also photos of Giuliano cooking with his own daughters, continuing the family tradition. 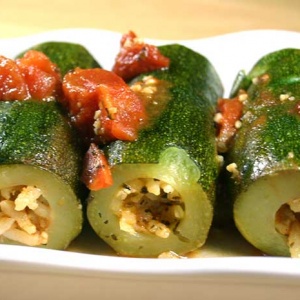 This dish is a perfect example of the amazing convergence of both sides of my family’s roots. My paternal grandmother, Nonna Giulia, and my maternal grandmother, Nonna Mary, both made these stuffed zucchini almost exactly the same way. Unfortunately, I have no written record from either grandmother, so my recollection has morphed into a single recipe. The tricky part is hollowing out the zucchini without breaking through the skin. The easiest way is to scoop from both ends of the zucchini, then push the insides out. The pulp is not used here but can be made into a delicious pasta sauce or used in a frittata.
Prep Time:10 minutes
Cook Time:45 minutes
Total Time:55 minutes
Author:Reprinted with permission from Hazan Family Favorites by Giuliano Hazan
Servings:4 servings
Review Print