Do you think brownies are off-limits because you have diabetes? Throw in some beans for added fiber, reduce your serving size, and enjoy Spicy Black and White Bean Brownies. 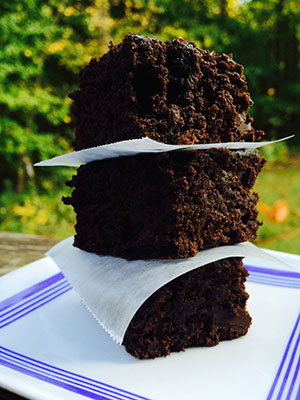 The CompostMaster and I attended Burning Man in 2005. If you aren’t familiar with the festival, it takes place in Nevada’s Black Rock Desert. You camp for a week and you can’t purchase anything while you’re there. We bunked in with the Department of Tethered Aviation (e.g. kitefliers) and our job was to feed their 40 members.

One night, we decided to serve adult s’mores. Our friends Snapper and Rolando came to visit while I was making the chocolate sauce, basically a combination of cheap chocolate bars and red wine. Rolando, whose real life job is to design floats for Mardi Gras in New Orleans, suggested I add some black pepper. “Pepper and chocolate, really?” I asked. He said it was the best way to make cheap chocolate taste more decadent. Boy, was he right! The sauce improved by an order of magnitude after I added the pepper.

I don’t cook with chocolate very often these days, but several years ago Bob’s Red Mill sent me some of their heirloom Orca beans and asked me to create a recipe, the first thing that came to mind was bean brownies. Then I remembered Rolando’s trick and I decided to throw in some chipotle chili powder. Well, I added a little too much in the first batch (1 teaspoon) – those babies were really spicy – so I cut the amount in half and it was perfect.

If you don’t think you like black beans, but want to incorporate more beans into your diet, give these dappled black and white Orca beans a try. They seem less earthy and less “beany” to me. I cooked a pound of the beans in a slow cooker and then had them available for stews and salads all week. They were especially good in my Black Bean Chicken Chili (I left out the bulgur) and Black Bean and Brown Rice Casserole. 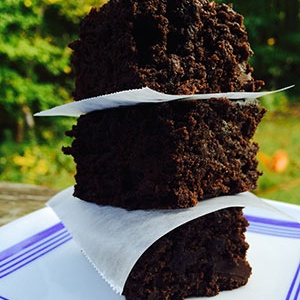 This recipe was originally developed using a black and white bean called "orca" or "calypso" from Bob's Red Mill. Bob's no longer offers this bean, but others do. If you can't find orca beans, use black beans instead.

Back in 2014, I belonged to a group called Virtual Potluck. Here are recipes other members of the group developed using orca beans. 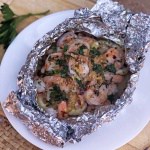