Are you constantly looking for meals that feature easy clean-up? Make these lemony Shrimp Scampi Foil Packets and then toss the foil. What could be simpler? 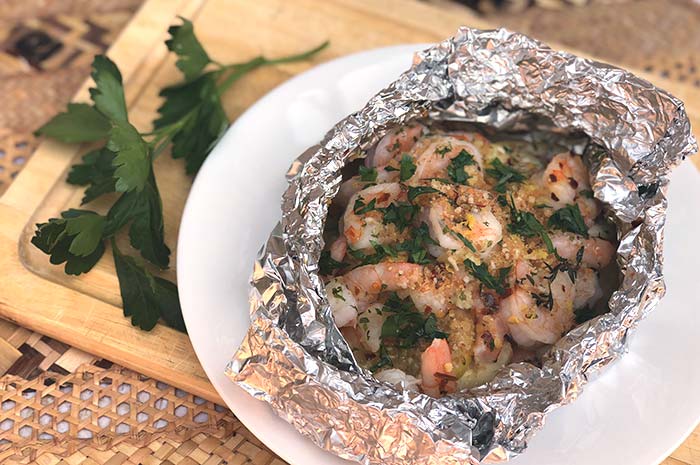 What is Shrimp Scampi?

Langoustines are tiny lobsters. In Italian, langoustines are called scampi and the traditional way of cooking them is in a sauce containing olive oil, white wine, and garlic. Since langoustines aren’t as easy to find in the U.S., cooks here started substituting shrimp in the dish instead. Hence, “shrimp scampi” was born.

Shrimp scampi can be rich and buttery or light and herby. It might be served over pasta (or not). It may be lemony or spicy, or both. Some versions of scampi contain alcohol in the form of dry white wine or vermouth, others don’t. While variations are unlimited, the key to a delicious shrimp scampi is not overcooking the shrimp.

How to Bake Shrimp Scampi Foil Packets in the Oven

How to Cook Shrimp Scampi Foil Packets on the Grill

Make it a Meal

Serve Shrimp Scampi Foil Packets with a salad featuring Homemade Citrus Vinaigrette or caesar dressing (step 2 only and skip the jalapeño). Whip up the dressing while the shrimp are cooking. Add a breadstick or whole grain roll if you can afford the carbs. If you’re feeling really ambitious and are in the mood to splurge, try Garlic Knots (but you’ll need to plan ahead). 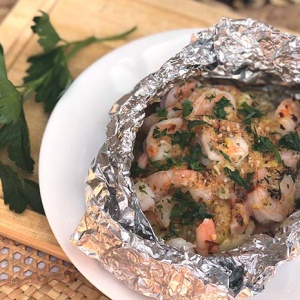 TO COOK IN THE OVEN

TO COOK ON THE GRILL

Having trouble finding artichoke hearts? If your grocery store has an olive bar, check there. You can also use frozen or canned artichoke hearts. If you use frozen, thaw them first. Watching sodium? Put fewer shrimp in your packet and use a little less of the topping. Also, look for artichoke hearts that don't contain any added salt. 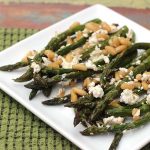