Display Search Bar
Follow me on Facebook! Follow me on Twitter! Follow me on Pinterest! Follow me on Instagram! Email me!
Home » Main Dishes » Fish & Seafood » Shrimp Avocado Tostadas (Gluten-free)
Jump to Recipe Print Recipe
We moved into our new house in March. I ordered shelves to hold my cookbook collection on March 29th, estimated ship date of April 1st. On April 12th, I received an email saying the shipment would be delayed until May 12th. On June 2nd, I got an email saying there was a “problem” processing my order and that I needed to call them. The “problem” couldn’t be handled via email. I called frequently over the next few days and was on hold more than 30 minutes each time before finally giving up. Since we were leaving for a two-week vacation, we were concerned that the bookcases would sit on the front porch while we were gone. The CompostMaster finally spoke to a human being on June 8th and they agreed to overnight our order on their dime. Hurray for good customer service. The bookcases arrived about 3 pm on June 11th. We left for Minnesota on June 12th. 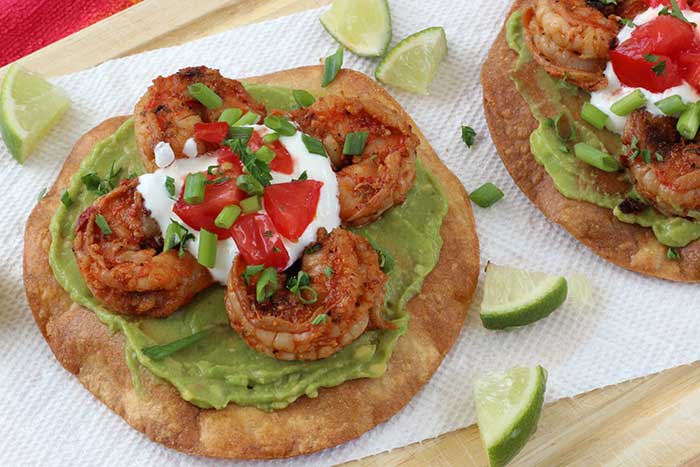 Here we are a month later and the CompostMaster is finally assembling the bookcases with help from Nephew #1. Part of the deal is that we feed him lunch. And we pay him. The good news is that he’s going a great job and has even reduced the CompostMaster’s aggravation level a couple of times. Twelve-year-old eyes can read the fine print on assembly instructions much more easily than, uh, older eyes.

For lunch one day during the bookcase project, we made Shrimp Avocado Tostadas. Nephew #1 likes to cook so we tag-teamed. I toasted the chiles, he made the marinade, I fried the tortillas, he mashed the avocado and cooked the shrimp. He pronounced our results good, but said he wished we had cut the shrimp into bite-sized pieces to make them easier to eat. I filed that excellent suggestion away for next time.

You may be thinking that you can’t eat fried food if you’re trying to be healthy. While it’s not a good thing to do every day, I allow myself to indulge once in a while. Frying food at home is preferable to eating the stuff you get in fast food joints. Make sure your oil is hot, but not smoking, before you start. If you have a thermometer, the optimal frying temperature is about 365°F. In the spirit of science, I decided to measure the oil before I started and again after I was done to see how much was actually absorbed by the tortillas. In my experiment, I found that about one tablespoon of oil was absorbed by frying four tortillas, so that’s the value I used to calculate the fat content in this recipe. 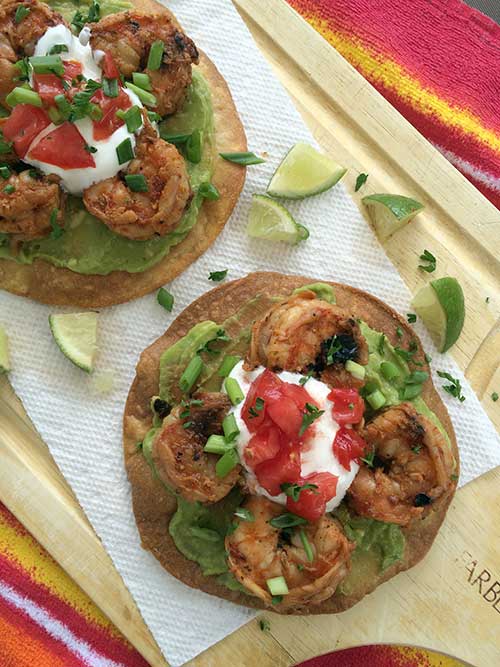 Quickly glancing at this recipe, you may think it’s too complicated. Here are some shortcuts that will make the tostadas easier to prepare:

If you want to eliminate most of the carbs entirely, don’t even bother with the tortillas. The avocado spread makes a great dip for the shrimp. You might want to add extra lime juice to make the avocado mixture thinner and easier to dip.

If you want to reduce the fat, you can bake your tortillas instead of frying them following Food Network’s technique. Just skip the part where you cut the tortillas into wedges; keep them whole. 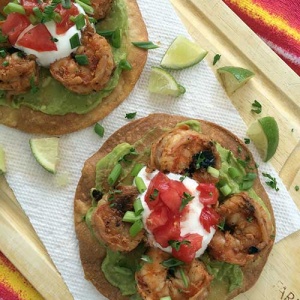 Guajillo chile peppers are mild and slightly sweet. If you want more heat, use a hotter chile. If you don't like heat, substitute ground black pepper for the cayenne.