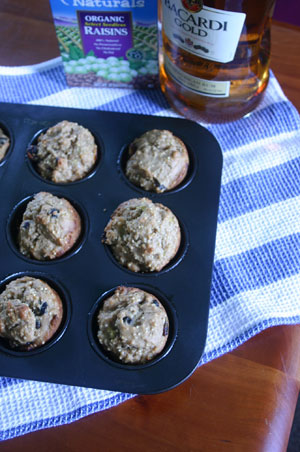 The Grillmaster is a sucker for anything with “rum raisin” in the title. Favorite ice cream? Rum Raisin. Favorite bread pudding? Rum Raisin. You get the idea. As I read through Annie Mahle’s book Sugar & Salt: A Year at Home and at Sea marking recipes I wanted to try, I knew what I’d be making first as soon as I hit page 99 – Millet Rum Raisin Muffins.

If you aren’t familiar with millet, it’s a nutty-flavored grain that is gluten-free. It’s a good source of protein, B vitamins, thiamin, riboflavin, niacin, and folate. One-quarter cup of millet has approximately 33g of carb.

I made these delectable Millet Rum Raisin Muffins twice ‐ once with still-crunchy millet and bananas and once with creamy millet and apples. Both versions were bursting with raisin goodness, but I think the rum flavor was more prominent in the apple version. The banana muffins had some crunch due to the millet and the apple muffins had texture because of the apple chunks.

Changes I Made to the Millet Rum Raisin Muffins

The minor changes I made to the recipe decreased the calories, carbs, and sugar and increased the amount of fiber slightly.

The Grillmaster liked the apple version the best; he wasn’t a fan of the crunchy millet bits. I would eat either version of the muffins again. I might make them in a mini muffin pan next time to reduce the carb count even more.

Interested in learning more about dining at sea? Read my interview with Annie.

Disclosure: I received a free review copy of Sugar & Salt by Annie Mahle plus a second copy to give away. All opinions are my own. This post contains at least one affiliate link. 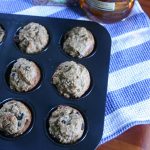 Because I make my own vanilla, I’ll sometimes use homemade bourbon vanilla in place of the rum and vanilla in the recipe. On the boat I’m often cooking for folks who are gluten-free; even oatmeal (unless specifically labeled) is verboten, so for breakfast on the day I serve oatmeal, I’ll make my gluten-free passengers either grits or millet with butter and then have extra for these muffins another morning. Millet is one of the ancient grains so important to early civilizations; nowadays it’s making a comeback in the U.S. Millet has a nutty, corn-like flavor which works well as a side dish or in breads and pastries. These are the favored muffins for Toni, my assistant cook of five years, and she asks me to make them every week. Mmmmm. They are delicious. Gluten-free baking mix is easily substituted for the all-purpose flour in this recipe.