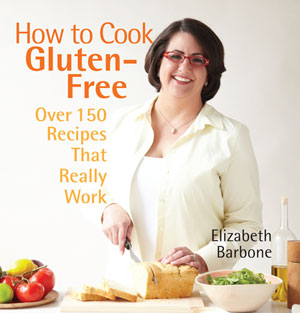 Elizabeth Barbone, who has just about the coolest glasses on the planet, asked me to test some recipes from her brand-new cookbook, How to Cook Gluten-Free. I haven’t jumped on the gluten-free bandwagon, but decided it would be fun to see what all the fuss is about.

Elizabeth sent me a handful of recipes – Powdered Sugar Doughnut Muffins (probably not the best choice for me), Grapefruit and Avocado Salad with Citrus Vinaigrette (sounds really good and diabetic-friendly, but it’s pretty similar to the Beet, Avocado & Grapefruit Salad with Fruity Vinaigrette recipe that I posted a couple of weeks ago), Roasted Tomato Pizza with No-Rise Pizza Crust and Upstate “Goulash” (basically, a GF pasta dish that is fairly high in carbs). I decided to try the pizza.

The crust for this pizza is made with white rice flour, tapioca starch and xanthan gum, three products that, I can say with 100% accuracy, have never been in my grocery cart before. I figured I would have to order these ingredients from the Internet, but my local grocery stores surprised me. Yes, I had to go to three different stores that are 40 miles apart, but that’s a small price to pay for being able to buy local.

One thing I really like about this pizza is the use of roasted tomatoes instead of a tomato-based sauce. When you roast the tomatoes yourself, you can control the amount of salt and skip sugar entirely. With prepared sauces, you have to read labels carefully to see how much of these ingredients they contain. The roasted tomatoes with the artichokes and caramelized onions is an inspired combination. I loved this pizza, especially after I hit my slice with a little bit of Tabasco sauce!

The No-Rise Pizza Crust is very different from other pizza crusts I’ve made. For one thing, it’s very dry when you knead it (Elizabeth says this is normal). I ended up adding more water than the recipe called for just to get the dough to hold together. Once baked, the crust is thin and crisp, almost like a cracker. The Grillmaster likened it to “a shortbread crust that isn’t sweet.” It would be a nice neutral canvas for many different toppings, sweet or savory.

The most important thing to remember is that

Gluten-free does NOT mean carb-free.

One-twelfth of this pizza has 32g of carb. I would serve this as an appetizer rather than as a meal so you won’t be tempted to have a second (or third) piece.

You can find Elizabeth online at glutenfreebaking.com and you can buy your own copy of How to Cook Gluten-Free at amazon.com.

I’ve reprinted the recipes below as they appear in the cookbook. A few notes:

If you have any experiences with gluten-free eating, I’d love to hear them! 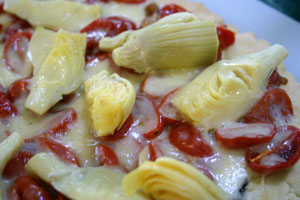 This pizza is sauce-free but not tomato-free. Rather, the tomatoes are oven-roasted for a deep, rich tomato flavor. I usually use grape tomatoes because they are easy to find and roast really well. In the summer use whatever great tomatoes you find at the farmers’ market. I’ve used Sun Gold tomatoes, which are supersweet little yellow tomatoes, with fabulous results.

2. In a large bowl, toss the tomatoes with a generous drizzle of olive oil. You want the tomatoes to be glistening with olive oil but not drenched. Sprinkle lightly with kosher salt and toss to coat tomatoes.

3. Spread the tomatoes on the prepared baking sheet. Roast until the tomatoes soft; the edges should be a dark golden brown with some black spots. (Roasting time will vary depending on tomatoes. Check them after 20 minutes.)

6. Bake the crusts for 15 to 18 minutes, until lightly golden brown. Remove from the oven and place on a wire rack. Leave the oven on.

1. In a medium bowl, whisk together the white rice flour, tapioca starch, sugar, baking powder, salt, and xanthan gum. In a small bowl, mix together the water, eggs, and oil with a fork or small whisk until combined. Pour the egg mixture over the flour mixture. Using a wooden spoon, stir to combine until a dough forms. The dough will be on the dry side. This is normal.

2. Generously sprinkle your counter with white rice flour. Turn the dough out onto the counter. Knead the dough until it is smooth. If, after kneading for a minute, the dough is still dry and doesn’t hold together, add a tablespoon more water.

4. Set an 18 by 13-inch baking sheet very close to the rolled-out crust. Grab the corners of one of the long sides of the parchment paper and slide the crust into the pan. Do this quickly.

5. Top and bake as directed in the recipe.

Nutritional Analysis: The sodium in this recipe is coming primarily from the salt in the crust, the canned artichokes and the mozzarella cheese. If you are watching your sodium intake, look for frozen artichoke hearts, which have less sodium. You may also want to reduce the amount of salt and cheese. If you are watching fat and cholesterol, you may want to use egg substitute instead of eggs in the crust.