Are you ready for some football? I know I am. Two periods define my year: Virginia Tech Hokies football season and “other.” The poor Grillmaster is now entering the football widower zone. We’ll be eating this Far East Steak Salad a lot in the coming months! 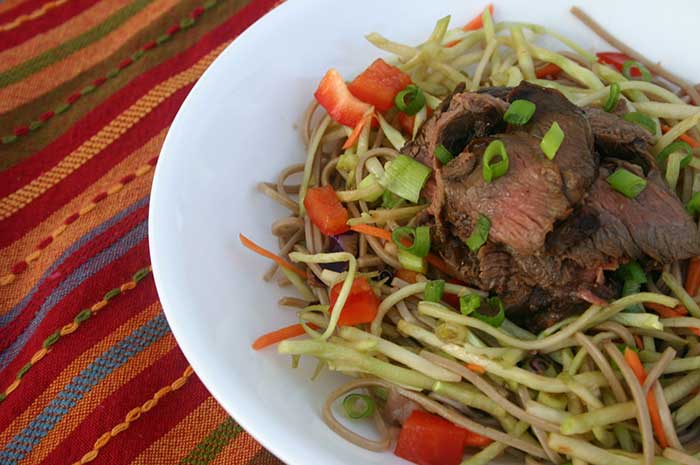 I attended my first Hokies game of the season yesterday. Unfortunately, given the distance we travel, we generally don’t tailgate. If we did, I’d bring this Asian-inspired steak salad. I thought it would be the perfect choice for the #SundaySupper gang’s virtual tailgate party.

I’ve been making Far East Steak Salad for almost as long as I’ve had diabetes (since 1999). I can’t believe I haven’t posted the recipe before as it is one of my favorites. It’s simple to throw together, you can serve it hot, cold or room temperature, it travels well, it scales easily to fit the size of your crowd plus it’s tangy, sweet and crunchy too.

If I were taking this salad to a tailgate party, I would marinate the steak, make the dressing and put the vegetables and noodles in a large, resealable plastic bowl the night before. On game day, I would pack everything up, grill the steak once I arrived (or, technically, have the Grillmaster do it) and then throw the salad together on site. I might also grill some extra steak for those who turn up their nose at the prospect of having to eat vegetables in order to get meat.

What are Soba Noodles?

If you aren’t familiar with Japanese soba noodles, they are shaped like spaghetti and made from a combination of buckwheat flour and wheat flour. (Some are 100% buckwheat, which are gluten-free.) They taste earthier than noodles made from white flour, but aren’t quite as heavy as whole wheat noodles. Soba noodles are lower in calories, carbs and protein than their whole wheat counterparts. If you can’t find them in the Asian aisle of your grocery store, use your favorite spaghetti instead. Soba noodles may be labeled “buckwheat noodles” or “Shin Shu Soba.”

Do you know the three words every woman wants to hear? “Let’s go, Hokies!” 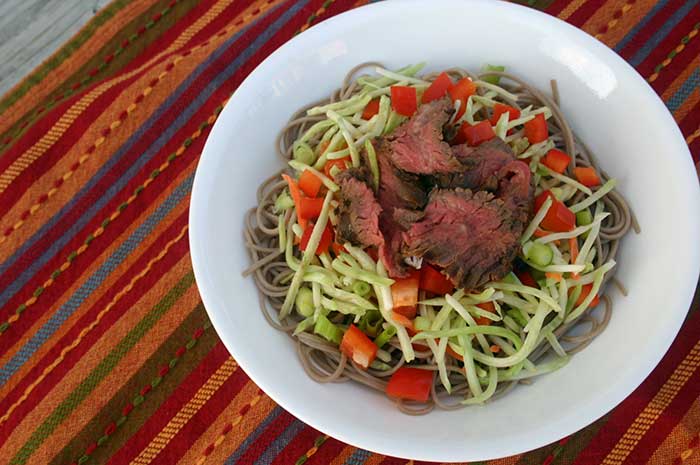 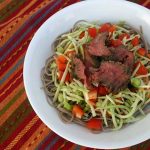 1 serving is approximately 3 ounces of steak plus 2 cups of salad. This salad is high in Sodium due to the soy sauce. If you're watching your sodium intake, use low-sodium soy sauce or reduce the amount.

Thanks to Lane Richeson of Supper for a Steal for hosting this #SundaySupper tailgating event.