Looking for a decadent dessert for a special occasion? Try Chocolate Bread Pudding.

Every once in a while I need something that’s chocolate – rich, luscious and dark. Milk chocolate is for people who don’t know better. I don’t make desserts often. When I do, I want them to be worth their weight in carbs.

The Grillmaster bought some whole-wheat bread from our new local bakery. He had a few slices, then we went out of town and left the bread, in a paper bag, on the counter. When we returned, the bread was dried out and hard, but not moldy. (If someone would like to explain the science behind this to me, I’d love to hear it.) Rather than throwing out the bread, I decided to make chocolate bread pudding. I haven’t been successful with this particular dessert in the past, but I didn’t really have anything to lose.

Imagine a soft, warm brownie. That’s what this bread pudding was like. It was, by far, my best bread pudding ever. I think the secrets to success are to (1) make sure your bread is very dry, (2) cut off the crusts, and (3) completely cover your bread pieces with egg mixture. You don’t want any stray bits poking up.

Don’t eat this every day – think of it as a special occasion dessert. When you indulge, try to have a low-carb, high-protein meal beforehand. I’d recommend serving this bread pudding with just a dab of low-fat whipped cream, vanilla yogurt or frozen yogurt. The chocolate by itself is very rich and screams out for some creaminess. 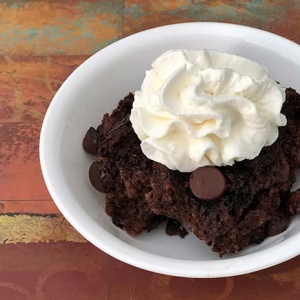 If you're watching saturated fat, feel feel to use 1/2 cup egg substitute instead of whole eggs.