If you’re from the South, chances are pretty good that you eat some combination of black-eyed peas, collard greens, rice, and cornbread on January 1st for luck and wealth in the new year. Try this calypso soup for a change of pace.

Rice for riches,
Peas for pennies,
Collards for dollars,
Cornbread for gold.
– Our State Magazine

I eat collards, but there are a lot of other leafy greens I like better, so I substitute. I hope it doesn’t affect my “dollars.” 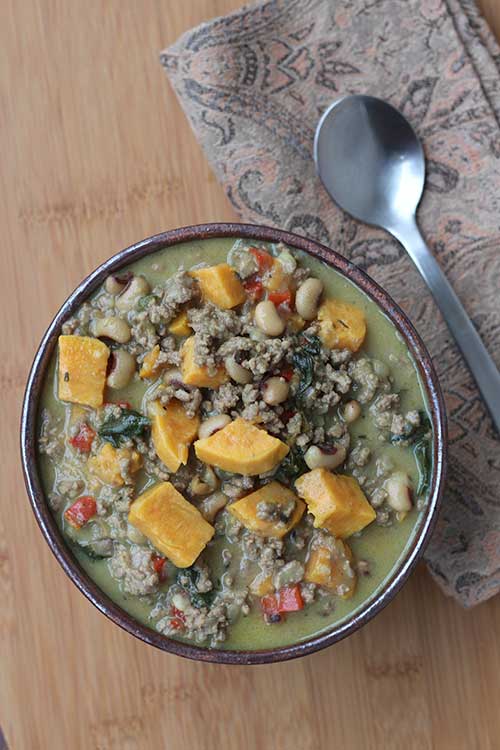 This hearty soup has you covered, especially if you eat a small slice of cornbread with it. I was totally amazed by the flavors – the soup is beefy, earthy due to the sweet potatoes and black-eyed peas, and tropical because of the coconut milk. And then the curry powder gives it a nice kick without making it too spicy hot.

If you need some other ideas about how to get in your black-eyed peas and greens for New Year’s, you might want to try Black-eyed Pea Corn Cakes with Spicy Sour Cream or Collard Greens with Black-eyed Peas and Tomatoes.

If you'd like to reduce the fat in this recipe, use ground turkey or chicken instead of beef and use chicken broth or water instead of beef broth. You could also reduce the amount of coconut milk or replace some of it with coconut water. If you're watching your Sodium intake, buy dried black-eyed peas and cook them yourself instead of using canned. You might also want to use water or low-sodium broth.