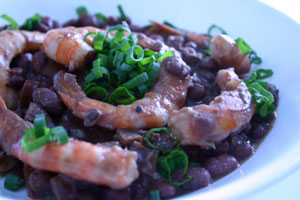 In trying to organize my cookbooks (a daunting task), I realized I have two copies of Emeril’s TV Dinners. I decided to make a recipe from the book and offer my second copy as a giveaway. More on that later.

The book features a recipe called “Andouille Smothered White Beans” that Emeril serves with pan-fried catfish. A quick scan of the pantry, refrigerator and freezer produced no catfish or white beans. I did find buffalo andouille sausage (from my project with The Buffalo Guys), shrimp and dried small red beans, however. The joy of cooking is using what you have available, right?

This recipe is easy, but it does take some time. It’s the perfect thing to make on a lazy Sunday. You just have to remember on your busy Saturday to put the beans in to soak. If you don’t want to have to keep an eye on the stove for three hours, you could probably transfer the mixture to a slow cooker after you add the garlic, beans and bay leaves. Just don’t use quite as much stock/water. (Note: I did not try the slow cooker method.)

If you don’t like spicy food, use a milder sausage and replace the cayenne with black pepper instead. The buffalo andouille I used was pre-cooked. If your sausage is not, add it at the very beginning when you sauté the onions and celery.

I’m giving away my extra copy of Emeril’s TV Dinners. To enter, leave a comment and tell me your favorite bean recipe. The contest will run through Monday, March 26, 2012. The winner will be chosen at random on Tuesday, March 27, 2012. You must be at least 18 years of age with a U.S. mailing address to win. No purchase is necessary; void where prohibited.

Don’t forget that The Buffalo Guys is offering 15% off sausage orders to Diabetic Foodie readers through the end of March 2012. This includes the delicious buffalo andouille featured in the recipe below. Just go to their online store and enter the code VIRTUALPOTLUCK when you check out. You will LOVE their products!

Heat oil in Dutch oven over medium heat. Add onions and celery; season with salt and cayenne. Cook until vegetables have softened, about 5 minutes. Add Essence seasoning, garlic, beans and bay leaves. Use as much of the water/stock as you need to cover everything and bring to a boil.

Reduce heat to medium-low and simmer, uncovered, stirring occasionally, until the beans are soft (about 3 hours). Remove bay leaves and add andouille and shrimp. Cook just until the shrimp get coral-colored and are opaque. Garnish with green onions and serve immediately.

Nutritional Analysis: This dish has 47g of carb, but it also has a whopping 27g of fiber which reduces net carbs significantly. If you are watching your cholesterol, reduce the amount of shrimp and sausage in this dish. The sodium in the recipe is coming from the Kosher salt, the sausage, the chicken stock and the shrimp. If you are watching your sodium intake, cut back on the salt and use water instead of stock. You could also cut back on the amount of sausage and shrimp.