Have you ever made your own chicken stock? Whenever I have leftover chicken or turkey bones, I throw them in a pot with some onions, carrots, celery, and herbs and let it simmer for as long as I can on the stovetop. This technique, while tried and true, does require that you keep an eye on the pot. Now I use my Instant Pot® (affiliate link) to make stock, no hovering required, and I call it Chicken Bone Broth instead. I feel so…trendy. 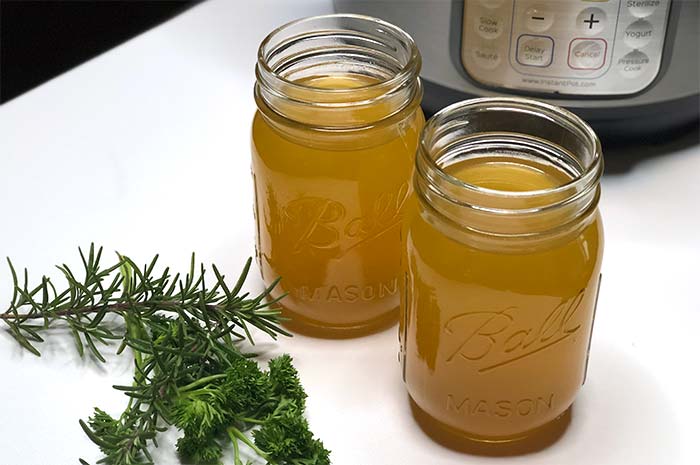 Note: This photo does not appear in The Diabetes Cookbook for Electric Pressure Cookers.

So, what’s the difference between stock and broth? Stock is made by simmering bones for a long period of time so the collagen seeps out. Broth is generally made from meat instead of bones. Bone broth is really stock in my mind.

You can and I do. However, most of the packaged products are high in sodium and they don’t have that depth of flavor and color that homemade bone broth has. Your own low-sodium stock will taste better and you can freeze it so you’ll always have some on-hand.

Is drinking bone broth really good for you?

Bone broth has been said to strengthen your immune system and help with digestion. NPR says it’s not the cure-all some people think it is. I don’t know if it’s as good for you as the hype says, but I use a lot of stock anyway and I like not letting those bones go to waste.

It may seem odd to include vinegar in a recipe for chicken broth, but it’s said to help pull nutritious minerals out of the bones and breaks them down more completely. Leave the skins on your onions for a darker-colored broth. Don’t throw out your turkey carcass after Thanksgiving—break up the bones and make turkey bone broth.

Ingredient tip: Stock and bone broth are essentially the same thing, made by simmering bones for a long period of time to let the collagen seep out. Broth is generally thinner and gets its flavor from meat rather than bones.