Looking for a low-carb, gluten-free alternative to pizza? This meatless Spinach Artichoke Pizza features a cauliflower crust started on the stovetop and finished in the oven. 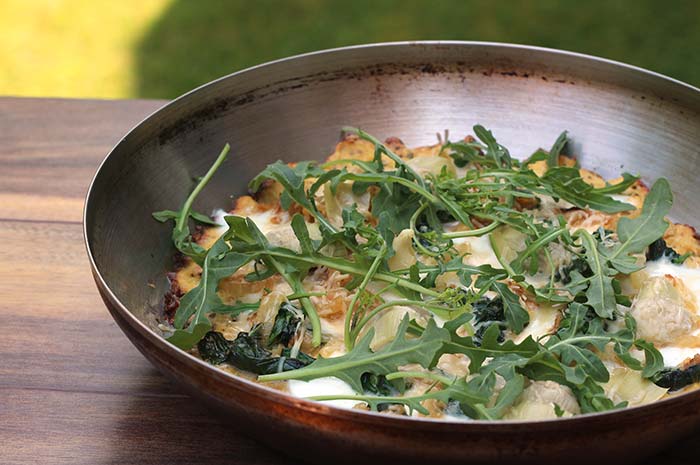 When I first tried making a cauliflower pizza crust, I did it entirely in the oven. It was fine but didn’t have the chewiness of regular pizza crust. I made this Spinach Artichoke Pizza by crisping the crust on the stovetop first, then placing it in the oven to cook through. Using this technique, the bottom had the right amount of crunch and the top got nicely browned in the oven. Perfect!

No Time to Make Your Own Crust?

I’ll bet you just scanned the recipe and thought “The pizza looks good, but I don’t have time to make that crust.” I hear you. Fortunately, there’s a company called KBosh that offer pre-made veggie crusts that are low-carb, gluten-free, and low-sodium. You keep them in your freezer and just pop them in the oven when you’re craving pizza. KBosh offers savory crusts made from broccoli, spinach, kale, cabbage, and zucchini. They also feature a dessert cauliflower crust that’s on the sweeter side and makes a great crepe replacement.

Disclosure: I received free samples from KBosh for review purposes. This post contains at least one affiliate link which means if you click it and make a purchase, I may earn a small commission at no cost to you. All opinions are my own.

Some grocery stores sell cauliflower already "riced." Starting with this will save you some time.

If your pizza doesn't slice easily, you either didn't let it crisp enough on the stovetop or you didn't use enough olive oil in the pan. It may not look pretty on the plate, but it will still taste delicious!

Watching sodium? Frozen artichoke hearts (if you can find them) have less sodium than those sold in cans or jars. Also, you may want to use less cheese as both mozzarella and Pecorino-Romano are high in sodium.