Every time you eat a black bean burger, do you think it lacks flavor and juiciness? Try this version loaded with red bell peppers, onions, and (surprise!) water chestnuts. Served bunless and topped with a runny egg and sriracha sauce, this black bean burger packs quite a tasty vegetarian punch. 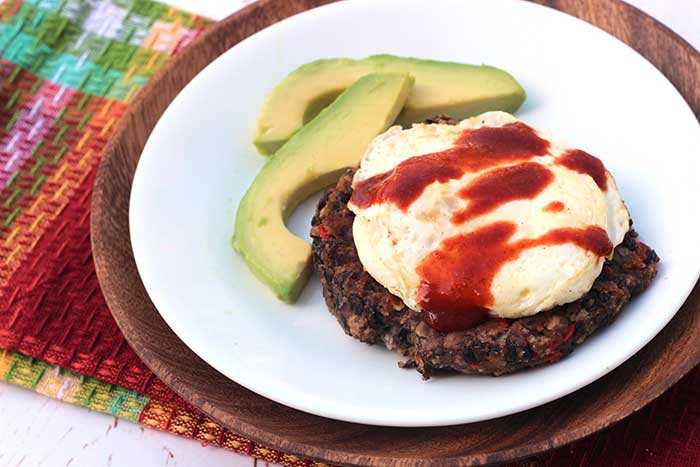 When my nephew was about three years old, we were in a restaurant and he wasn’t interested in eating whatever boring item he had ordered off the kids’ menu. Wandering over to my chair, he pointed to my chicken wrap with black beans and said “I want some of that.”

Never one to discourage a child from trying a new food, I gave him a bite (after requesting he say “please,” of course). His eyes lit up, a passion for black beans ignited. He’s still the only kid I’ve ever known who actually wants beans on his Chipotle burrito.

Fast forward 10 years. I’m again in a restaurant with my nephew who is intrigued at the thought of ordering a black bean burger. “I just don’t know how it’s served,” he says to his dad. “Are black beans mixed in with the meat or are they on top?” When I explain that a black bean burger is a meatless option with mashed up beans creating a burger effect, he looks horrified (as does his father).

My nephew didn’t order the black bean burger that night, but I’ve been on a quest ever since to find a recipe I think he’d like. The Sriracha Black Bean Burger from Jessica Levinson just might do the trick. My Notes on the Sriracha Black Bean Burger Recipe

I won’t repeat the recipe here, since I really didn’t make significant changes. Here’s the original recipe. My notes: