Did you hate beets as a kid? I was never much of a fan. Then, the first time I roasted beets myself, I had such a purple mess everywhere it was a while before I tried again. 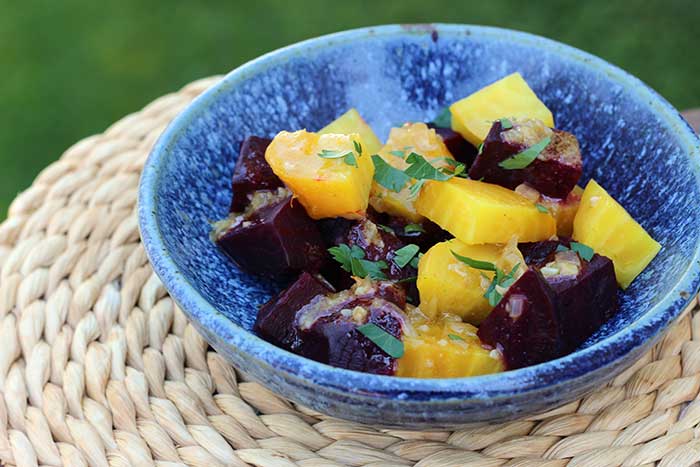 At a farmers’ market several years ago, I discovered golden beets. I concocted a Gold Beet and Goat Cheese Salad that was sweet and creamy. And no purple-stained hands afterwards. I moved on to Cauliflower Pizza Crust topped with gold beets and chicken-apple sausage. I was definitely becoming a fan.

Eventually, I found a technique that made working with red beets easier: wrap them individually in foil before roasting. When you do this, you can just slip the peels right off into the foil and then toss the package into the trash. Your fingers may get a tiny bit purple, but nothing else will (except the foil).

The Roasted Beets with Orange Vinaigrette recipe below features both red beets and golden beets. You can use any combination of beets or stick with only one type. If you’re lucky, you may find Choggia beets, aka Candy Cane beets because of their internal red and white stripes. They would be beautiful in this side dish.

Should You Eat Beets?

Need more motivation to incorporate beets into your diet?

Feel free to use all red beets, all golden beets, or any other variety.

Time-saving tip: If the dressing seems like too much work, try Homemade Citrus Vinaigrette instead, which is easier to make because it doesn't involve the stove.