My intentions were good. But you know what they say about good intentions.

I agreed to participate in the Association of Food Bloggers’ Hop Back in Time today. Members are telling stories about the history of eating. Some are talking about favorite restaurants that have closed, others are remembering a particular chef who inspired them. I chose to share some memories of a dish from my childhood – the infamous tuna noodle casserole. 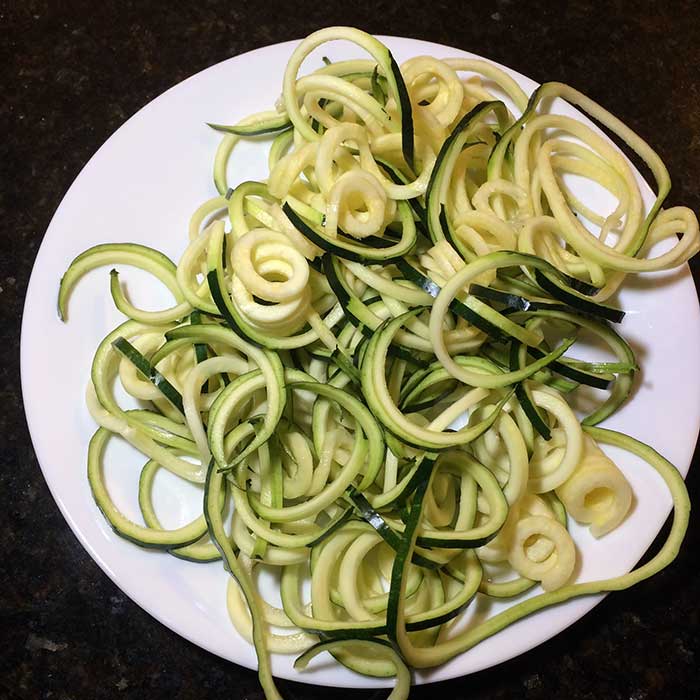 My idea was to create a healthier, less carby version of tuna casserole that didn’t require a can of cream-based soup. The proud owner of a new spiralizer, I thought substituting zucchini noodles for egg noodles would be revolutionary. The problem? I forgot that the weekend before the deadline I would have a house full of Easter company and be attending an out-of-town college lacrosse game. (Go Hop!) Let’s just say my recipe development efforts suffered. Greatly. I’ll share my pain a little later. For now, let’s review the glorious creation that is tuna noodle casserole.

Tuna casserole started out as a way to use up leftover fish back in the late 1800’s. Fish, usually cod, was combined with béchamel sauce in a baking dish and topped with bread crumbs. When canned tuna came out in the early 1900’s, cod was replaced with tuna by those who didn’t live near the shore.

My mom’s tuna casserole was pretty simple – tuna, egg noodles, cream of celery soup (I hate mushrooms, so she did this for me), milk, garlic salt, onion powder, celery salt, and butter dotted on top. It was my definition of comfort food and was one of the recipes I took to college with me. During midterms and finals, it was always tuna casserole to the rescue even though Mom wasn’t there to make it.

When I was considering how to create a more modern, healthier version of tuna casserole, I remembered an episode of A Chef’s Life that was all about casseroles. If you aren’t familiar with this PBS television series, it’s about a woman who grew up in rural, northeastern North Carolina, went to New York to become a chef, then returned to open a fine dining restaurant called Chef & the Farmer in her hometown of Kinston, NC. In every episode Chef Vivian Howard highlights something about NC, whether it’s oysters, sweet potatoes, or blueberries. I highly recommend both the show and the restaurant. Any restaurant whose menu features a section called “Pimp My Grits” gets two thumbs-up from me.

Anyway, A Chef’s Life had an episode about casseroles, particularly casseroles made by women in the community that Chef Vivian loved when she was growing up. Almost all of them contained cream of mushroom | celery | chicken soup. She explained that canned creamy soups became so popular because they are an easy substitute for the classic French velouté sauce. A velouté is a white stock-based sauce. Who wants to take the time to make sauce when you can open a can?

This got me to thinking about how I would make an updated tuna casserole that didn’t include canned soup as an ingredient. I’d simply make homemade velouté!

I turned to my copy of The Professional Chef’s Techniques of Healthy Cooking by The Culinary Institute of America and immediately remembered why I don’t like recipes written for professional chefs.

“Dilute the arrowroot in a little cold stock” – how much is a little?
“Bring the stock to a boil” – in what size pot?
“It will not stand up to long holding periods in a steam table” – what the heck is a steam table?

I navigated all of this and produced their Velouté-Style Sauce. I thought it was a little thin, but decided it would thicken up more during the baking process.

After time in the oven, my lovely spiral zucchini noodles were literally swimming in watery sauce. I blamed the velouté recipe at the time. Later I realized the zucchini had probably released a bunch of water too. My supportive husband bravely tried the casserole and said “It’s okay… if you like tuna casserole.” Which apparently he doesn’t. Who knew?

For attempt #2, I ditched the homemade velouté and went with a milk and cream cheese mustard sauce thickened with a tiny bit of flour. I also decided to salt and then drain the water from the zucchini noodles. Both were steps in a generally positive direction. I was feeling better about this whole thing. Then I whisked in the milk I didn’t realize was more than two weeks old.

You know how you get those little unrefrigerated coffee creamer packages in restaurants and, sometimes, when you add them to your coffee, they curdle? That’s what happened to my sauce.

After a trip to the store, I tried the sauce again. It worked much better and had great flavor. I put together the casserole and threw it in the oven. It tasted good, but I used a baking dish that was a little bit too large and the casserole was a little, uh, flat. Tuna casserole pancake, anyone?

By this time, the Hop Back in Time deadline was upon me. I will get my fabulous, healthy, low-carb Tuna Casserole with Zucchini Noodles recipe to work. And I’ll come back here and update this article to include the link. But it won’t be today.

Today’s story is one in a series of Hop Back in Time posts across several blogs sponsored by the Association of Food Bloggers which are looking at old restaurants, recipes, and history. Please don’t stop with this story! Hop to the next blog to read more!
Share
Tweet
Pin
Sweet Potato Cakes with Ham
Kale and Brussels Sprouts Slaw with Cranberries