Craving lasagna, but can’t afford the carbs? Try this White Chicken Lasagna where spaghetti squash pinch-hits for the noodles. 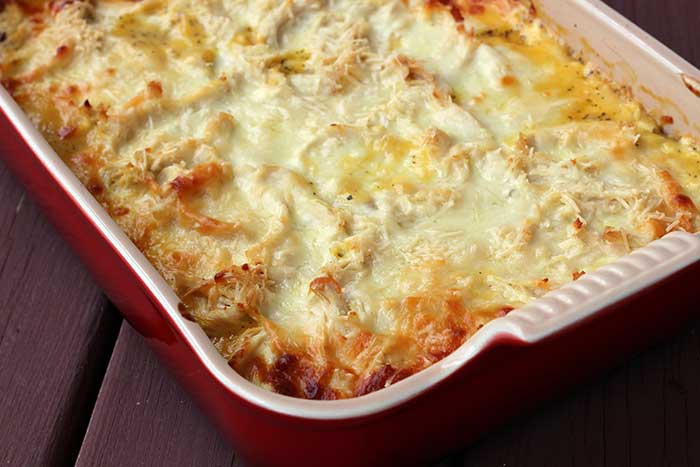 When I got married (the first time), some friends of my in-laws threw us a shower when we visited for Christmas that year. The gifts we received were Christmas ornaments which I thought was a wonderful idea since we’d both been on our own for a while and already had two sets of kitchen stuff. My mother-in-law’s friend Carolyn hosted the shower and she served an amazing chicken lasagna. I immediately asked for the recipe. A gourmet cook, Carolyn was embarrassed to admit that her lasagna contained canned cream of chicken soup, but she gave me the recipe anyway.

I made Carolyn’s lasagna for many a dinner party. Once I was diagnosed with diabetes, I cut out most pasta dishes and completely forgot about the recipe. I ran across it the other day and decided to make a few healthy substitutions, namely the spaghetti squash for the pasta.

How I Made Healthier Chicken Lasagna

My first attempt was way too cheesy. All you could taste was cheese. Also, I cooked my spaghetti squash improperly and it turned to mush. And I forgot that the CompostMaster has an aversion to pimientos which were an ingredient in the original recipe.

My second attempt was much better. I cut back on the cheese and substituted red bell pepper for the pimientos. I also found a better way to cook the squash, modeled after the technique in Spaghetti Squash with Jalapeño Cream.

What to Serve with Chicken Lasagna

The next time you’re craving a creamy, cheesy, chicken lasagna, give this casserole a try. Serve it with Garlic Knots and a nice green salad – you can splurge and have bread since you aren’t having any pasta! 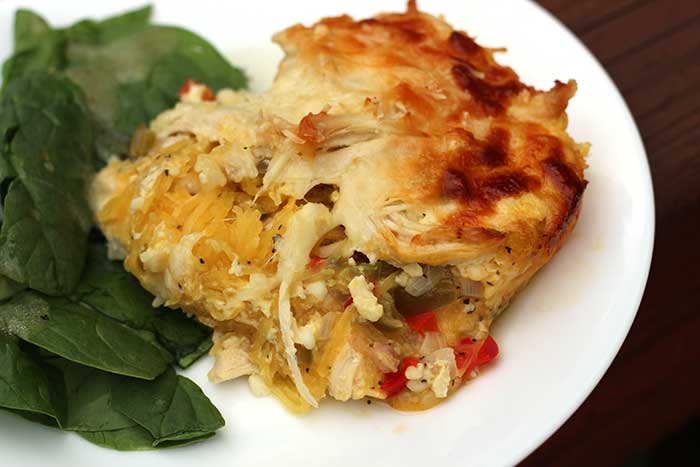 Watching sodium? Use low-sodium cream of chicken soup. Almost all of the sodium in the recipe comes from the soup.

Watching fat? Use low-fat or nonfat cottage cheese and milk. You could also cut back on the amount of mozzarella and parmesan cheeses and use an egg substitute instead of whole eggs. 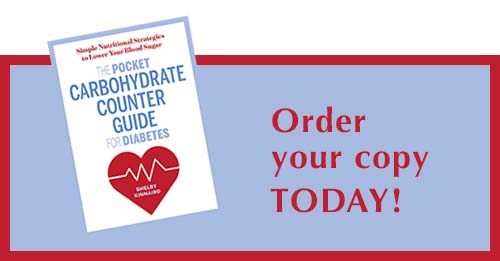