Display Search Bar
Follow me on Facebook! Follow me on Twitter! Follow me on Pinterest! Follow me on Instagram! Email me!
You are here: Home / Desserts / Peach Tartlets for #FoodFromFiction
Share
Tweet
Pin
“Can we do a chocolate pie this time? I love chocolate pie.”
I grit my teeth. “I don’t know how to cook no chocolate pie,” I lie. Never. Never again after Miss Hilly.
“You can’t? Gosh, I thought you could cook anything. Maybe we ought to get us a recipe.”
“What else kind a pie you thinking about?”
“Well, what about that peach pie you did that time?” she says, pouring a glass of milk. “That was real good.”
“Them peaches from Mexico. Peaches ain’t in season around here yet.”
“But I saw them advertised in the paper.”
I sigh. Nothing is easy with her, but at least she’s off the chocolate. “One thing you got to know, things is best when they in season. You don’t cook pumpkins in the summer, you don’t cook peaches in the fall. You can’t find it selling on the side a the road, it ain’t in.” – from The Help by Kathryn Stockett (G. P. Putnam’s Sons, 2009)

This week, a few members of the Association of Food Bloggers are sharing recipes they were inspired to create after reading fiction. I was all set to tell you my story of reading Nora Ephron’s Heartburn cover-to-cover in the bathtub in one sitting and give you a delicious recipe for Butterbeans with Pears. But my version was almost inedible. I’m sure Nora’s was much better. 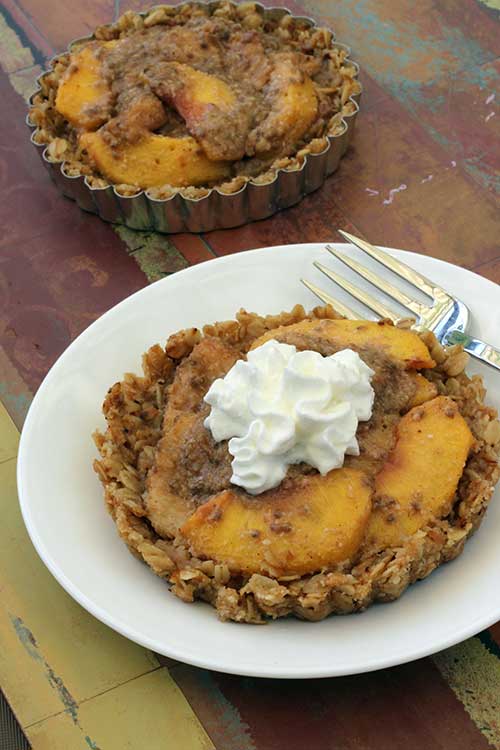 Instead I’m bringing you a gluten-free, vegan variation of one of Minny’s infamous pies from Kathryn Stockett’s The Help. No, it’s not THAT pie. I’ve already got a recipe for chocolate pie, not that it’s quite like Minny’s. This is a dessert that celebrates the fact that peaches is [sic] in season.

My family is loosely connected to The Help. I read the book while vacationing at Bar Harbor View Cottage in Maine. (Yes, we own the house and we do rent it out. Thanks for asking!) On the drive back home, we stopped in Connecticut to visit my husband’s brother, Rob, and his wife, Deborah. She spied my copy of the book and got very excited. The author of the book and director of the movie were both from Jackson, Mississippi, Deborah’s hometown. Her sister, Linda, attended the movie’s premiere and was even interviewed on the local news. You can see her at about 1:27 in the video clip below.

Now about that pie. I’ve been experimenting with gluten-free baking. I’m not exclusively gluten-free, but I do feel better when I don’t eat wheat. Some wheat-less baked goods are, um, less than stellar, but I have developed a crust I like to use in tarts and crumbles that features toasted rolled oats, almond flour, and coconut oil. 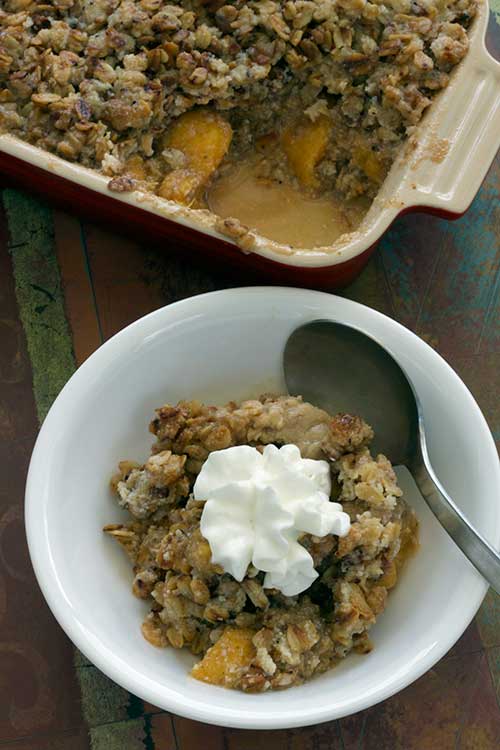 If you think making mini-tarts is too fussy and you don’t have time for that or you don’t own and can’t borrow appropriate pans, make this as a crumble. It’s incredibly easy and tastes just as good. Use the same amount of filling, but cut the amount of crust you make in half. Making a crumble instead will also reduce the amount of calories, fat, and carbs in this recipe. 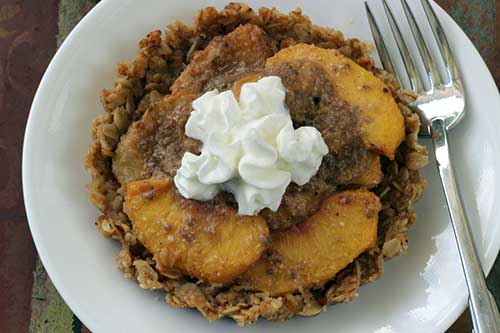 SHORTCUT: This recipe works equally well as a crumble. Make the same amount of filling, but cut the crust ingredients by half. Place the filling in a 7- x 5-inch baking dish that has been sprayed with cooking spray. Top with crumbled crust mixture and bake 15 to 20 minutes at 375 degrees F or until the crumble is bubbly in the corners.

If you enjoyed this recipe, please hop to the next in the series!