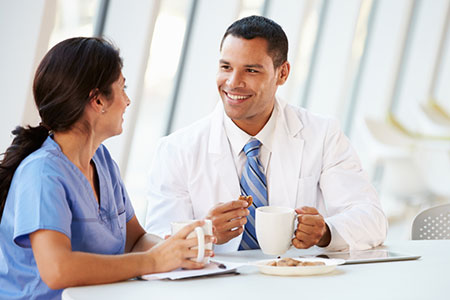 My best friend recently had surgery. She had a few complications that landed her in the hospital for several nights, so I ate at least one meal in the hospital cafeteria for three consecutive days. Given that I’ve been trying to eat less wheat, less dairy and less meat, my choices were somewhat limited.

First there were the specials of the day – some sort of animal protein, two sides and bread. There was always beef, usually chicken and one day they had fish, but of course, it was fried. The sides were either carb-laden (mac & cheese, mashed potatoes) or vegetables cooked limp beyond recognition (broccoli).

The next station featured all fried foods, all the time. This is where you could get a cheesesteak (they did offer a chicken version if you were feeling virtuous), a cheeseburger, fried fish, fried chicken, etc. And, of course, you could get freshly cooked french fries.

Finally, I spied a salad bar. It had soup too – chicken & dumplings and turkey chili. The salad bar offered the usual veggies plus chickpeas and sunflower seeds. Dressings included all of the thick creamy ones (thousand island, French, ranch) and one vinaigrette – a sickly sweet raspberry.

Beverages offerings were anything in a bottle plus fountain drinks and coffee. And iced tea. Sweetened iced tea. Two giant canisters of tea, both of them sweet.

So to all of you hospital administrators out there, I’d like to make a few recommendations for your cafeteria. You know, the place where your currently healthy employees and visitors are forced to eat at least one meal per day.

I don’t have to eat in a hospital cafeteria every day, thank goodness. As I glanced around the dining room, I watched people in scrubs wolf down meals such as burgers and fries or roast beef with mashed potatoes and mac & cheese and bread. Even the folks who had healthy-looking salads usually got a side of fries.

I’m not saying that offering healthier food will make people eat it, but at least give folks a choice. They might surprise you.