So, you’re probably sick of seeing recipes featuring home-cooked chickpeas by now. I do want to showcase one more recipe before I take a break from the lovely garbanzo bean, however, to prove that chickpeas make delicious meatless entrées.

If you get the Cooking Channel, you might want to check out Jason Wrobel’s new Friday night show How to Live to 100. Each week, Alton Brown style, Jason features a superfood and shows amazing things to do with it. So far, he’s covered cauliflower, coconut, tomatoes and squash. Cauliflower tacos, anyone? 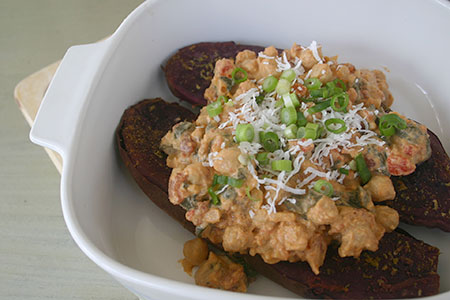 This recipe for Creamy Coconut Chickpeas with Sweet Potatoes comes from Jason’s show. I followed the original recipe with the following exceptions:

You could also save some time by buying roasted red peppers in a jar, but it will probably cost you some fat and sodium.

This dish transports easily to the office for a healthy, filling lunch. Cook the sweet potatoes and make the chickpea mixture, then refrigerate them separately. Combine on a plate and reheat in a microwave.

Nutritional Analysis: The nutritional information for this recipe was calculated assuming 16 ounces of sweet potatoes were used (4 ounces per serving). While heavy on the carbs, this dish has a whopping 12g of Dietary Fiber. If this is too many carbs for you at one meal, even after subtracting off the amount of fiber, cut back on the size of your sweet potatoes and/or use fewer chickpeas. The Fat in this recipe is coming from the coconut oil and coconut milk. Watch Jason’s show about coconuts or read what I wrote about coconut oil to see why eating this type of fat might not be so bad.