Have you ever tried making your own dill pickles? It’s easier than you think. 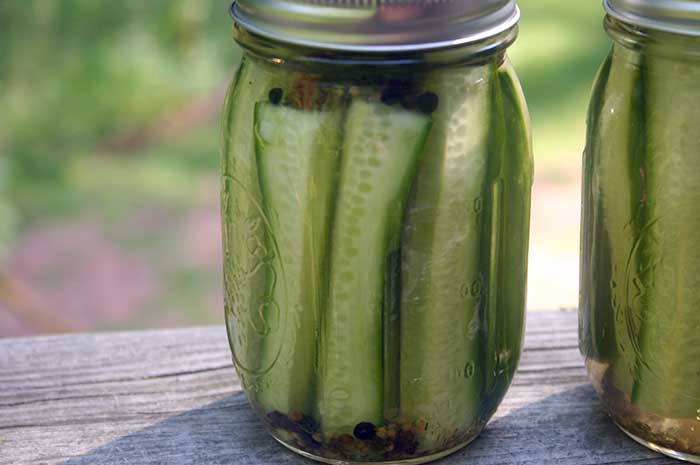 We have some pickle-loving people in our family. Well, everyone except the Grillmaster. There aren’t many things he won’t eat, but pickles are one of them. Everyone else is crazy for the crisp, vinegary wonders.

I prefer bread and butter pickles to dill. I like both sweet and tangy sensations. Not only could I polish off an entire jar of pickles in one sitting, I would strain and drink the juice too. My mother has been known to use sweet pickle juice for basting a ham and as a salad dressing.

When my nephews (ages 11 and 8) visited a few weeks ago, the older one asked if we could make some dill pickles after we found a few giant cucumbers hiding under some weeds in the garden. It sounded like fun to me! Well, we were so busy bowling, skating, and hiking while they were here that we completely forgot about pickle-making until an hour before their grandparents arrived to pick them up. Somehow I didn’t think that would be enough time.

I’d never made dill pickles before, so I filed it away as something to try one day. The next time I went grocery shopping, the most perfect pickling cucumbers were on sale. I took it as a sign.

I made the pickles and took a couple of jars to my nephews and their sister. A couple of weeks later my sister-in-law sent me a picture of my 21-month-old niece happily eating one of my pickles. I think they were a hit.

Please note these dill pickles aren’t canned with a water bath, so you must keep them refrigerated.

Since these pickles aren’t canned with a water bath, you must keep them refrigerated.