Display Search Bar
Follow me on Facebook! Follow me on Twitter! Follow me on Pinterest! Follow me on Instagram! Email me!
Home » Main Dishes » Meats » Pulled Pork Tenderloin (Slow Cooker)
After being sick for more than a week, I was desperate for an easy-to-prepare meal that would result in a few days’ worth of leftovers. I didn’t want anything chicken-related since I’d eaten soup made from chicken stock and frozen potstickers for more meals than I wanted to count. I wasn’t in a beef mood either – that just seemed too heavy. 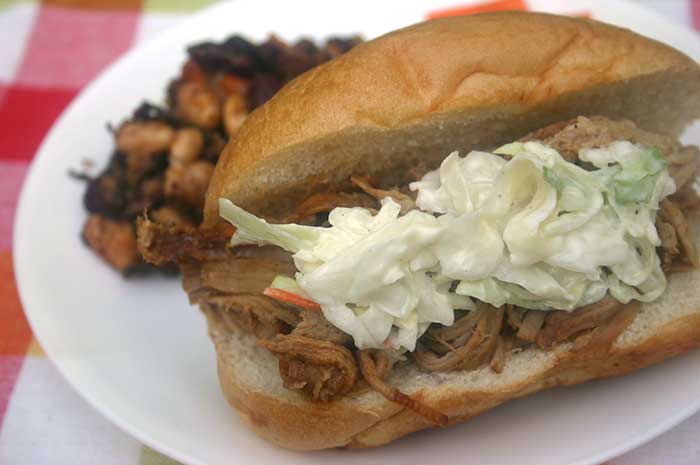 When I think “easy,” I think slow cooker. And when I think “slow cooker,” I think pork. I didn’t want a fatty cut of pork, so I decided to use pork tenderloin. I had some bottled barbecue sauce in the pantry and that seemed like exactly the amount of prep I wanted to do: open bottle, pour sauce.

Tenderloin cooks much faster in the slow cooker than other cuts of pork. It was done in about 3-1/2 hours on the High setting. A thin sauce will work best; you want to keep the meat moist, but you don’t want to drown it.

We ate the pulled pork on sandwiches, in hash and on salads. This recipe made more than four meals for two of us. I put a new discovery, Cackalacky Sauce, on my sandwich and in the hash. This zesty sauce did a great job of clearing out my sinuses! (Cackalacky is produced in Chapel Hill, NC.)

If you’re looking for a pork dish that is super easy to make, versatile, tasty and will last for several meals, this is it. 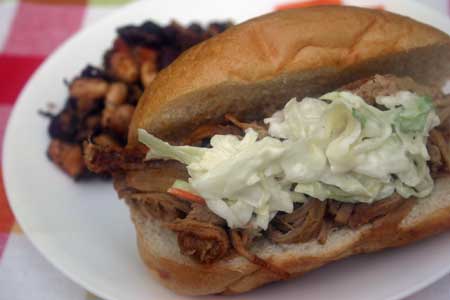 Nutritional information is based on the sauce I used. Your mileage may vary.