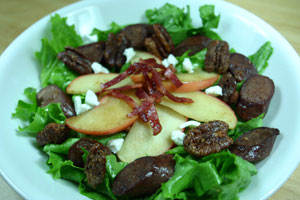 I was thrilled when The Buffalo Guys said they would be interested in throwing a party with Virtual Potluck. I was even more excited when I learned I would be receiving a variety of buffalo sausages – Polish, bratwurst, andouille, and hot dogs – to cook with. Each VP gang member will feature a recipe today highlighting one of these sausages. Check out my buffalo round-up post for links to all of them. The Buffalo Guys will also be offering a discount to all Virtual Potluck readers; see below for details.

The Grillmaster and I devoured the Polish sausages right away and forgot to photograph anything, so they were eliminated from recipe development contention. I had used the andouille before in Black-Eyed Pea Polenta Casserole, so I decided to create a recipe with either the brats or hot dogs. Well, hot dogs and scrambled eggs is a tradition in my family (often for Sunday supper), so the hot dogs disappeared quickly too. Lack of options makes the way clear.

I love salads with meat on top. When I first found out I had diabetes, this was a go-to meal for me since these types of salads have lots of protein and few carbs. I especially like salads with pork, apple and nuts, so I decided to create a version using buffalo brats, apples and candied pecans. The brats were amazingly juicy and sweet with a hearty taste. Laurie’s Little Buffalo Cookbook that shipped with the sausages warns you to cook buffalo “low and slow.” Since buffalo is lower in fat than beef and pork, it cooks faster and can dry out if overcooked. Don’t forget to reduce the heat after you crisp up the bacon in the recipe below.

Before it slips my mind, I want to warn you about something: the Candied Pecans are absolutely addictive. That old saying “you can’t eat just one” was never truer. These pecans make a sweet, nutty snack or cocktail party nibble in addition to being the perfect crunchy topping for this salad. And if you want to wake up a tired bowl of oatmeal, these pecans are better than an alarm clock.

I was curious about how buffalo bratwurst compared to traditional pork bratwurst. I’ve summarized my findings in the table below:

100 fewer calories and about 2/3 of the fat sounds like a winner to me! I also like that these sausages contain no fillers, MSG, nitrites or nitrates and that the buffalo are range-raised without antibiotics or growth hormones. For more information about The Buffalo Guys and their products, check out my round-up post and their website. I’m sure they would also appreciate it if you gave their Facebook page a LIKE.

The Buffalo Guys will offer a 15% discount off any hot dog or sausage purchase through the end of March 2012. Just go to their online store and enter the code VIRTUALPOTLUCK when you check out.

Disclosure: I received 4 free packages of buffalo sausage from The Buffalo Guys, one each of Polish sausage, andouille sausage, bratwurst and hot dogs.

Combine all dressing ingredients in a screw-top jar. Cover and shake well.

In a large skillet, cook bacon over medium-high heat until crisp. Remove and drain on paper towels. Add sausage to skillet and reduce heat to medium-low. Cook until sausage has heated through, about 5 minutes. Remove sausage from pan.

Add olive oil to pan, then add apples. Cook, stirring often, for about 3 minutes or until apples are crisp-tender. Remove from heat.

Reshake jar containing dressing. In a large bowl, toss lettuce with about half of the dressing. Arrange lettuce on 4 serving plates. Top with sausage and apples, the sprinkle with bacon, Candied Pecans and goat cheese. Drizzle with remaining dressing.

Nutritional Analysis: This recipe is a bit high in fat and sodium. To cut back on both, use less sausage (maybe 2 links instead of 4) and eliminate the goat cheese. You could also skip the salt in the dressing to reduce the sodium count. The salad will still be delicious.

Preheat oven to 300°F. In a medium bowl, whisk egg white until foamy. Add pecans and toss to coat well. Let sit for 5 minutes. Place brown sugar in zipper-top plastic bag. Add pecans to bag; shake well to coat. Spread evenly on ungreased 15×10-inch baking sheet. Bake, stirring twice, until pecans are toasted and dry, about 20 minutes. Remove from oven and transfer to cool surface (I used another baking sheet). Cool and store in airtight container for up to 2 weeks (but they won’t last that long).

Nutritional Analysis: Pecans have fat, but of the 9g of fat in 2 tablespoons of Candied Pecans, only 1g is saturated, 5g is monounsaturated and 3g is polyunsaturated.