Are you trying to eat more meatless meals? This quinoa lentil chili featuring dried chile peppers and kidney beans is both vegan and gluten-free. 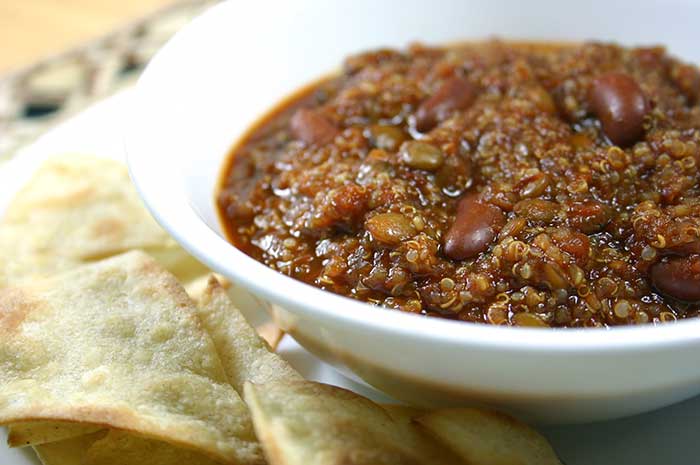 We’re entering the third week of the Virtual Potluck Tasty and Healthy New Year Challenge featuring products from Bob’s Red Mill and California Olive Ranch. Once a week for the first four weeks of the year, we’ll be pairing a flour or grain with an olive oil and creating a dish using both. Our third course challenge is to create an entrée with Quinoa (say “KEEN-wa”) and Arbosana Extra Virgin Olive Oil.

I decided to create a vegetarian entrée in the spirit of being “tasty” and “healthy.” Once I found a stash of dried chile peppers in the pantry, I knew this quinoa lentil chili wouldn’t require a trip to the store. Plus, who doesn’t love to eat chili in January?

This version of chili is thick and earthy, yet very smooth. I usually add chunks of tomatoes, meat and other vegetables, so this texture was a nice change of pace. (I know I’m supposed to be going vegan here, but this quinoa lentil chili – minus the beans – would be perfect for slathering on hot dogs.) I love the way the quinoa provides a caviar-like “pop” in your mouth.

Arbosana EVOO is a “complex, nutty oil with flavors of fresh tomato and almonds.” I’m not sure my palate was able to discern the tomato flavor, but the nuttiness was certainly there. COR is absolutely right when they say Arbosana is fabulous drizzled on stews. Chili is stew, right?

The one thing this quinoa lentil chili is lacking is crunch. I always need crunch with a meal or I still feel hungry afterwards. I took some corn tortillas (if I’d had time I would have used Homemade Corn Tortillas), brushed them with Arbosana, cut them into wedges and baked them at 400°F for about 8 minutes.

These homemade tortilla chips provided the perfect amount of crunch. I used about ½ teaspoon of the olive oil for each 6-inch tortilla. One tortilla (6 chips) adds about 70 calories, 3g fat and 11g carb.

Too many carbs for you? Reduce the amount of quinoa, lentils, and/or beans.

Bob’s Red Mill and California Olive Ranch gave one lucky reader a bag of Quinoa and a bottle of Arbosana Extra Virgin Olive Oil. The contest ended at midnight Eastern on Sunday, Jan. 22, 2012 and the winner was announced on Mon., Jan. 23, 2012.

Disclosure: I received free samples of Quinoa from Bob’s Red Mill and Arbosana Extra Virgin Olive Oil from California Olive Ranch. I also received samples to give away on my blog.