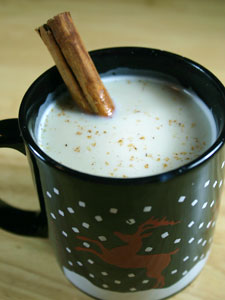 I occasionally enjoy a cup of coffee or a latte, but my hot beverage of choice tends to be green tea. When the weather turns crisp and other folks start drinking peppermint cocoa and hot buttered rum, I want something special too.

This quick and easy version of Creamy Chai Tea will toast your toes before you can say “Grandma got run over by a reindeer.”

The vanilla almond milk produced a richer, more decadent beverage although it did mute the cardamom, cinnamon, ginger and clove flavors typically associated with chai. The nonfat milk yielded a thinner drink, but the chai taste shone brightly.

Try both and let me know which you prefer.

Heat milk until hot, but not boiling. (I used the “Beverage” button on my microwave.) Pour into cup over chai tea bag. Steep 3 to 5 minutes and remove bag. Add cinnamon stick and dust with nutmeg.