Looking for a new soup recipe to add to your culinary repertoire? Try this rich, flavorful gluten-free tortilla soup with roasted tomatoes and onions. 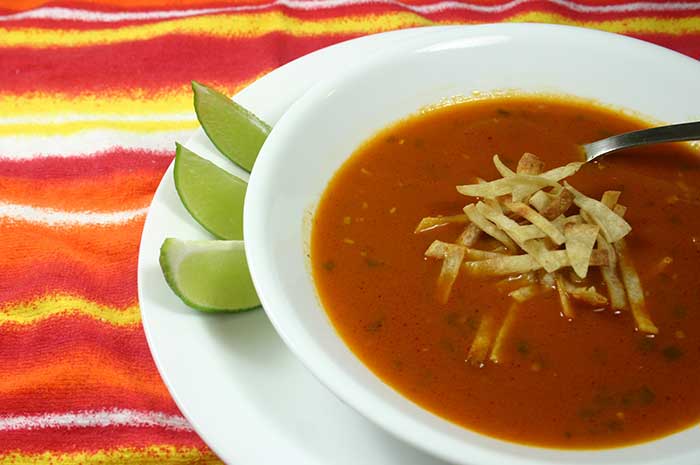 A couple of years ago during our annual pilgrimage to Maine, my stepdaughter and I went out to hit some of our favorite shops in Ellsworth. We picked a restaurant called The Mex for our girls’ lunch. We didn’t really expect good Mexican food in Maine, but it was one of the only downtown restaurants we hadn’t tried. Somehow we both ended up getting a bowl of soup with chicken and lime. I don’t think either of us spoke a word while we were eating (which is very unusual). We liked that soup so much, we innocently suggested to the guys that we have lunch at The Mex the next day, never confessing we’d already eaten there. This recipe reminds me of that tortilla soup.

The one technique I really like about this recipe is the way you roast the vegetables. Roasting lends a depth of flavor that is difficult to achieve any other way. And the really nice thing is that you don’t even need to have tomatoes that are particularly ripe. Roasting brings out the flavor of store-bought tomatoes when “real” tomatoes aren’t in season.

This is a thin soup; in fact, The Grillmaster thought it was too thin until he added some cheese. I liked the soup the way it was and didn’t think the cheese added much in the way of flavor or texture. (We don’t always agree on everything.) If you do like your soup a bit thicker, you can use the technique of adding some crushed baked tortilla chips as described in the recipe for Butternut Squash & Scallop Chowder.

The jalapeños add heat and flavor, but they don’t make the soup mouth-scorching. If you’re timid about hot peppers, use green bell pepper instead. This soup is a good source of Vitamin C and Niacin.

Make it vegan: Leave out the chicken and use vegetable stock in place of chicken stock. Also skip the cheese.