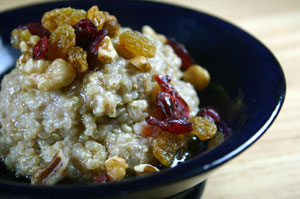 Quinoa for breakfast? You bet! We’re going to kick off Breakfast Week with something you’ve probably never considered having as your first meal of the day.

If you aren’t familiar with quinoa, it’s a gluten-free “supergrain” that is high in protein. You can read more about it in my post about Quinoa Salad with Spinach, Parsley and Spring Onions.

I’ve had quinoa side dishes, but never considered having it for breakfast. This recipe combines quinoa and vanilla almond milk with cinnamon, dried fruit and walnuts. It’s kind of like having oatmeal, but it isn’t quite as creamy. Think of it as oatmeal with attitude. I love having whole grains in the morning. It makes me feel full and energized for hours.

This dish is low in Cholesterol, Saturated Fat and Sodium and is a very good source of Manganese. If there are too many carb grams for your eating plan, you can use plain almond milk and/or skip the agave/maple syrup/honey. I used the vanilla almond milk, but skipped the sweetener and it was plenty sweet for me. (Your mileage may vary.) I like serving this with a couple of slices of turkey bacon.

Make It Ahead – Cook the quinoa the night before (through the step where you add the almond milk and cinnamon and let it simmer for an additional 15 minutes). Refrigerate. In the morning, heat the quinoa in the microwave, then add your sweetener (if using), walnuts, dried cranberries and golden raisins.

Make It Portable – Cook the quinoa the night before (through the step where you add the almond milk and cinnamon and let it simmer for an additional 15 minutes). Refrigerate. In the morning, drizzle on the sweetener (if using) and pack the quinoa in a container. In a second container or zipper-top plastic bag, pack the walnuts, dried cranberries and golden raisins. When you get to work, heat up the quinoa and add the walnuts and fruit.

In a small saucepan, bring the water to a boil over high heat. Slowly add the quinoa and bring to a boil again. Reduce heat to low, cover and simmer for 10 to 15 minutes or until all water is absorbed.

Add the almond milk and cinnamon. Simmer another 15 minutes.

Divide into two serving bowls. Drizzle with agave, maple syrup or honey, if desired. Top with nuts, cranberries and raisins.