Have you ever cooked bok choy? It’s become one of my favorite vegetables to stir-fry. Try it with sesame chicken and red bell peppers. 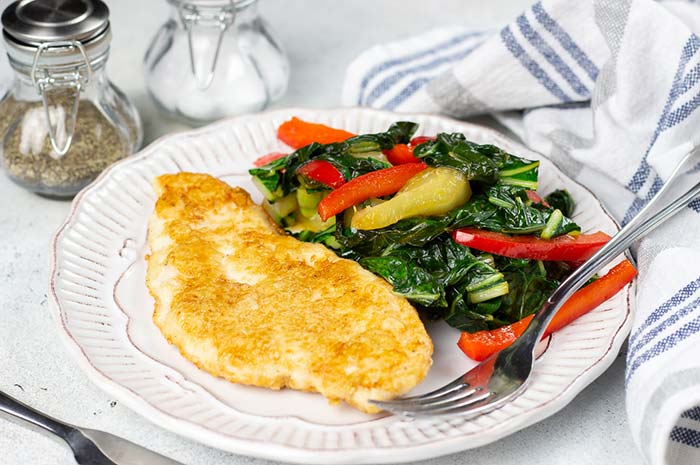 I have torn so many recipes out of magazines, I decided it was time to start trying some of them. I saw this healthy sesame chicken breast recipe in a issue of Real Simple well over a year ago. I’d been craving bok choy, but didn’t want to do my traditional stir-fry, so this looked perfect.

Before diabetes (BD), I made a version of sesame chicken that involved dipping chicken breasts in butter, coating them with cornflake crumbs, sesame seeds, Parmesan cheese and spices, then pan-frying them. Served with a sauce made from orange juice, red currant jelly and more butter (among other things), it’s no wonder I ended up weighing more than I should! This version lightens things up by using egg whites instead of butter to allow the sesame seeds to adhere to the chicken and skips the sauce in favor of some nice vitamin- and fiber-packed Asian-flavored veggies.

The original recipe called for baby bok choy (which I couldn’t find) and a red jalapeño (which I also couldn’t find). I liked the idea of adding something red for color but I didn’t want to miss out on the heat, so I went with a red bell pepper and added some Sriracha sauce (fondly known as “rooster sauce” around here). I also substituted agave for the sugar.

How to Cook Bok Choy

The most important thing I’ve found when cooking bok choy, especially when stir-frying, is that the white parts take longer to cook than the green leafy parts. I always separate the white from the green and throw the white parts into the wok first. I add the greens at the very end giving them just enough time to wilt. This prevents overly soggy greens.

Like to stir-fry? (It’s one of my favorite ways to get a meal on the table quickly!) Check out these other recipes: