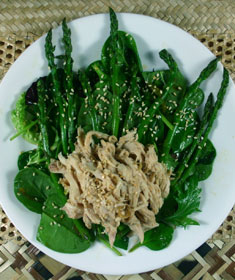 Ethnic restaurants barely exist where I live. The only Asian food I get between Thanksgiving and Easter, when tourists are scarce, is what I cook myself. So I was delighted to find a few Asian-inspired recipes in Patricia Wells’ Salad as a Meal cookbook.

Patricia’s Asian Chicken with Asparagus and Sesame is the perfect springtime dish. I snagged some fresh, young asparagus in our local grocery store, but there was no hope of finding Asian salad leaves such as mizuna, tatsoi or komatsuna. Instead, I used baby spinach, but a spring salad mix would have worked equally well. The dressing made with rice vinegar, tamari, sesame oil and scallions wasn’t too salty or too oily, complaints I often have about Asian-style vinaigrettes. I did use low-sodium tamari that was gluten-free too, so that may have helped.

One of the best techniques I have learned from Salad as a Meal is how to dress a salad. You dress the ingredients separately. In this case, you first dress the greens and put them on the plate, then the asparagus and finally the chicken. Patricia says to use separate bowls for each ingredient, but I’d rather wash one bowl instead of three! I don’t know why dressing a salad this way makes such a difference, but it does. Each bite literally pops with flavor.

The recipe calls for 3½ cups of cooked chicken. Patricia has a recipe for cooking chicken in Salad as a Meal, but I have a tried and true method that I always use, so I opted for that instead.

How to cook chicken when you need the meat for a recipe and how to make stock:
Place chicken breasts (with skin and bone) into a stock pot. Cover with fresh, cool water. Add an onion (quartered), a couple of celery stalks (cut into 1-inch pieces) and a couple of carrots (cut into 1-inch pieces). If you have fresh herbs such as rosemary, thyme and parsley, tie them together with kitchen twine and throw them into the pot as well. Bring to a boil, then reduce heat and simmer, partially covered, for about 40 minutes. Turn off heat and let chicken cool slightly while submersed in the stock. Remove skin and bones from the meat. Use the meat in your recipe and throw the skin and bones back into the pot with the stock. Bring to a boil, then simmer, covered, for an hour or two. The longer you simmer the stock, the richer it will be. Strain and freeze or refrigerate.

I’ve provided nutritional information for Patricia’s recipe below although I don’t have permission to publish the recipe itself. I just wanted you to have a sense of how a salad like this might fit into your meal plan. You can reduce the sodium content significantly by using low-sodium tamari or soy sauce.

All nutritional information provided here was calculated by Diabetic Foodie using the tools on the nutritiondata.com website.