Give homemade black bean soup an extra kick with a dollop of sour cream laced with cilantro, lime and jalapeño sauce. 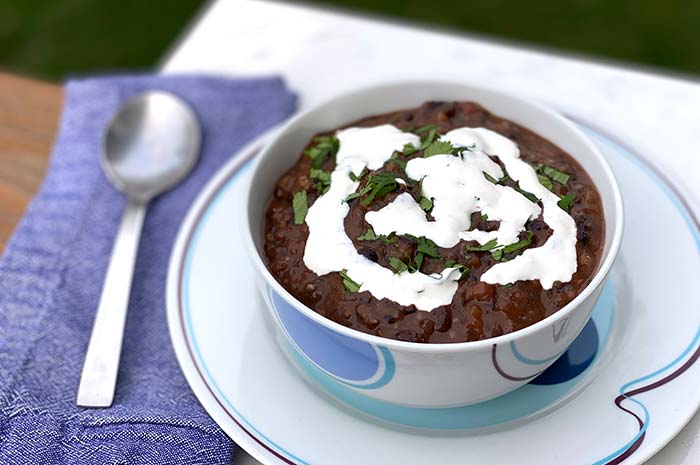 I was looking through one of those “30 days of menus for diabetics” plans for some lunch ideas. One lunch featured canned black bean soup. I immediately thought of a black bean soup recipe I haven’t made in years. And when I say years, I mean it. I’ve been married to my current husband for more than six years and he’s never had this version of black bean soup. I knew this recipe was better than anything a can could offer and was really happy that I was able to (a) remember the cookbook it was in, and (b) actually find said cookbook.

The original recipe called for canned black beans, but I decided to use dried beans and soak/cook them myself. This cut about 750mg of Sodium per serving! I also used turkey bacon, light sour cream, tomatoes with green chiles and threw in some extra garlic. Making this dish takes considerably more time than opening a can of soup, but it’s definitely worth it.

This soup is low in Saturated Fat and Cholesterol and is a good source of Fiber, Protein, Thiamin, Magnesium, Potassium, Copper, Manganese and Folate.

Make it Vegetarian: Skip the turkey bacon and sauté the onions and garlic in a little bit of olive oil.

Give homemade black bean soup an extra kick with a dollop of sour cream laced with cilantro, lime, and jalapeño sauce

FOR THE CILANTRO-LIME CREAM

TO MAKE THE SOUP

TO MAKE THE CILANTRO-LIME CREAM

If you have an electric pressure cooker (e.g. Instant Pot), cook the beans according to the recipe for Low Sodium No Soak Beans and skip step 1.